The sinking of the Whacker Quacker.

On Easter Saturday I was returning to the conference centre in Liverpool where I was an observer at the NUT national conference when I noticed something amiss with one of the yellow Duckmarines.
The duckmarines are Liverpool's distinctive tour vehicles based on the Beatles song Yellow Submarine. These are amphibious vehicles from World War 11.
As I approached I noticed that a small boat was attempting to tow an empty duckmarine which was clearly sitting low in the water. A few people were standing around watching but there was no great excitement. As I watched the vehicle did not appear to be sinking at all, though I was bemused at the attempts to tow it with a small boat with an outboard motor.
However thinking things here could get more interesting I walked along keeping a close eye on things.
Suddenly I noticed the smaller boat casting off as the front of the duckmarine dipped. Clearly they were afraid of being dragged under. 29 seconds later the duckmarine was on the bottom and I had a fine set of pictures 'in the can'. I had propped my elbow on a railing post to support my camera and shot a series of pictures from a fixed position. I was shooting with a Nikon D800 on 50mm f1.8 lens, ISO 140 at 1/250 sec at F8.0. I knew my pictures could hardly be of better quality.

I had come to Liverpool uncharacteristically ill-equipped.  I had one camera, no battery charger or spare battery and no usb cable to connect my camera to a computer or card reader. I had left behind my eye fi card which would have enabled me to directly upload pictures to the internet. I was shooting Nikon raw files (NEFs) and not JPEGs.

After taking the pictures I met my partner for lunch and went to a conference fringe meeting. I exercised no sense of urgency in trying to sell my pictures.

After the fringe meeting I went to the press office at the conference centre and enquired after contacts with the local paper the Liverpool Echo. I left a message on a journalists mobile and another journalist got back to me. At this stage they were unaware of the sinking. Soon I was in the Echo office trying to find a way of converting my files that didn't involve downloading software or spending money. They had Photoshop installed, used Nikon cameras but couldn't open a Nikon raw file. I wondered who the amateurs were. When I suggested I would like to be paid for my images there was much humming and haa ing. There seemed to be no system in place for buying pictures from freelancers other than to depend on generosity of the freelancer.
Anyway a price was agreed and my pictures were, that evening, on the Echo website with a prominent byline.
I was feeling pleased with myself and made no further effort to promote my images other than a few comments on Facebook.
The next day driving back from Southport I had a call from BBC North West. They wanted my images for a news programme going out one and a half hours later. I was half an hour from my camera and a laptop and aware that I still didn't have a cable or means of converting my files.
I got back to the hotel, borrowed a flash card reader from a passing IT teacher and downloaded UFRaw the open software. Five minutes before they were aired I was still emailing JPEGs to the Beeb.
I asked the Beeb for the same amount I had squeezed out of the Echo....dinner was paid for.


Next morning I headed out to get a copy of the Echo and found two of my pictures dominating page 3 where the sinking occupied most of the page. They had also used a picture taken by a staffer of the aftermath. Then my phone started to ring. The Daily Telegraph were first followed by The Mail, the Mirror and the Sun.
Hats off to the Telegraph, They were the straightest and easiest to deal with though, in the end, not the most profitable. The Telegraph had a schedule of rates for pictures which they emailed me.
The man from the Mirror started by impugning the quality of my images and said they would have to consider what they were worth. HE HAD PHONED ME to get the pictures.
The man from the Mail was interesting. After making me a decent offer which I accepted he said, "The Mirror want them also will you accept the same from them?" What was the Mail doing negotiating the purchase of pictures for a rival paper?
When the Sun got in touch they new exactly what I'd accepted from the Mail and Mirror.
No matter I was very pleased with myself. The Sun didn't use my pictures but the others did. 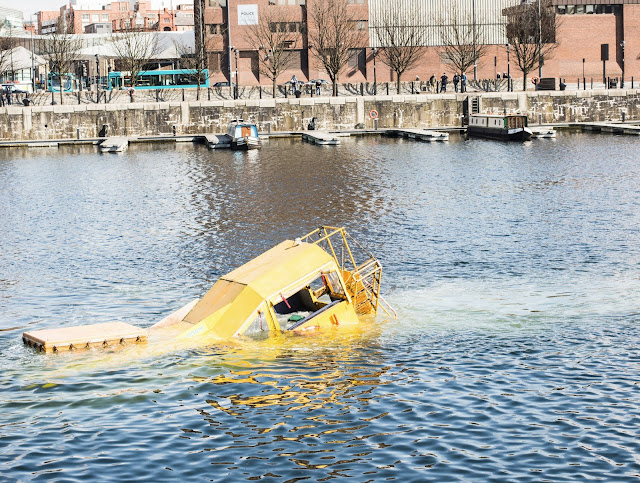 When I googled 'sinking duckmarine' I found that The Wirral News  and Scotland's Daily Record had also used my pictures.

I have invoiced the for the same amount I was offered by the Mail and Mirror.
So I learned a few lessons;

I made a point of only sending pictures after I had received email confirmation of the agreement but in retrospect I know my agreements should have been tighter.
None of the papers had a good account of events because I hadn't given them one. The papers showed the sinking as taking place at 1-45, my camera recorded the time as 12-30. It also shows that from being cast off by the tow boat to hitting the bottom took 29 seconds. I had been in a position to write up the drama and not taken it.
Had I circulated my pictures with a story on Saturday afternoon they would have been more widely used. The fact that national papers still found them interesting on the Tuesday after demonstrates their interest value. 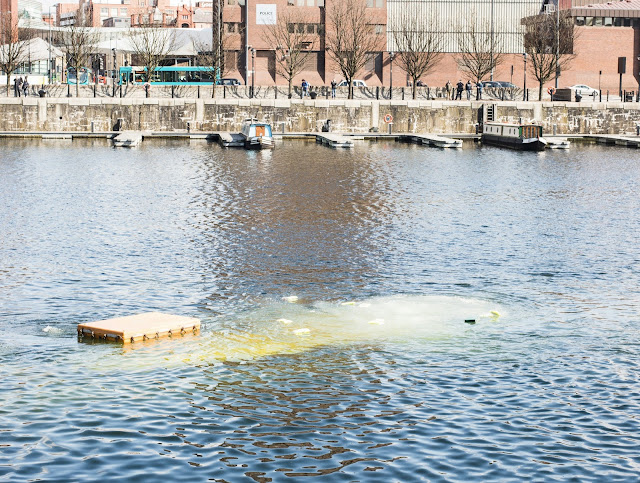 I have put together a slideshow of the images i took which you can see on YouTube.