I was photographing a wedding recently when, though a wonderful day was had by all, from a photographer's point of view, much that could go wrong, did. 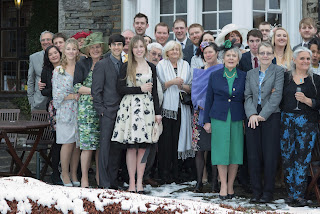 The weather was dire and many roads around the hotel, in Cumbria, were blocked. Most of the guests got there apart from those stuck in Irish airports.

Plans for some scenic outdoor shots were abandoned early as a very chill wind threatened exposed and unexposed extremities. 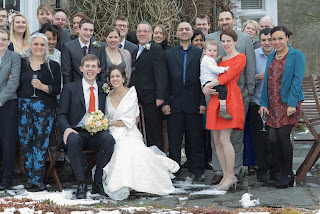 I had taken a number of small group shots in the porch of the hotel with my 17-55 zoom. I had also with me my 85mm prime for portrait shots. However in the excitement of getting the group shots I dropped my camera from the tripod head to the stone flags and removed the zoom lens from any further responsibility for the days pictures.

I did however have 50 people standing around in the cold waiting for the large group shot.

I stood on a plastic patio table and shouted instructions trying to arrange the group so that everyone was visible...failed. 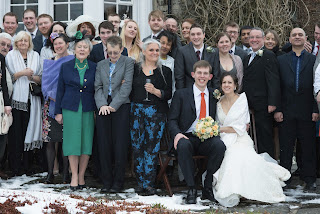 Tried to get them looking like they were enjoying themselves...modest success.

And fired a burst,with my 85mm lens, using the grid lines on my viewfinder to line up my shots so that I had a decent overlap between frames.... and crossed my fingers until they were white. They were already blue.
Below is a selection to the ten shots I took. 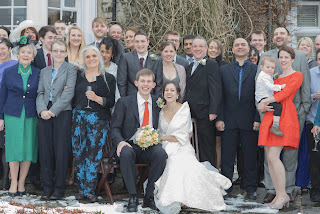 I processed them initially in Lightroom and exported them to my desktop to work on in PTGUI. I don't know of a means of directly exporting to PTGUI.

Now shooting panoramas is fairly straightforward if certain things remain constant. Exposure for one, was no problem on a consistently dull day. Neither was focus much of a problem. Though best practice would be to shoot in manual I used autofocus. Subject movement was the joker in the pack.

I've said that exposure wasn't an issue but in one sense it was. When I exported images from Lightroom I kept them in 'original' format, as I knew that PTGUI can deal with Nikon Raw files and I thought this would give best quality. Except in my first few attempts the detail in the wedding dress was lost, completely bleached out. I realized that when exporting in 'Original' format form Lightroom I was losing all the edits I had already done on the pictures. I solved this by exporting as TIFs.

Subject movement I dealt with using PTGUI's masking functions. Wherever a head moves or eyes closed between shots I could chose which head to use as long as I had more than one to chose from. I had to do this less than half a dozen times.

The result is a 65 megapixel image. To give you an idea of how big that is here is the brides face from one of the pictures 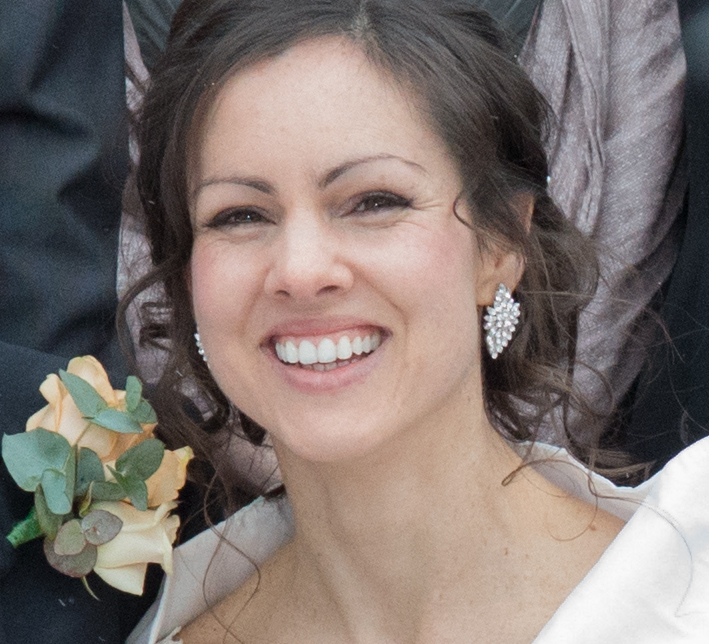